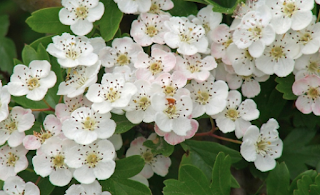 Mara's message is about the realm of Faery. Not the sort of Tinkerbell caricature from Disneyland, but an actual cousin race, real beings of light and energy.

When I wrote my latest novel, "The Hidden Abbey," I had  an experience authors often have - something I hadn't planned on, something I thought only had a minimal role in my story, came into full bloom, wanting to be more involved in my story. It was the race of Faery. In particular a half-Faery, half-human character named Shayla, and the Hawthorn tree guardian Faery male named Folimot, inserted themselves by wanting a bigger role in my novel than I had originally anticipated or planned for. So, my interest in Faery was piqued.

The Celtic Faery Faith and Beltaine

On the First of May we stand on the threshold to Beltaine, the Celtic festival of summer, when all the Green World is charged with new life beneath the light of the growing sun. In Ireland, Beltaine was a time when the faeries rode out of their dwelling places in the Hollow Hills within the Earth into the human world.

Until quite recently, many people had encounters with faeries and lived side by side with them in quite a natural way. Some of these faery seers were descended from generations of country-dwellers who had kept the old beliefs intact; others were visionaries, poets and artists, who refused to be influenced by the modern materialistic world-view.

The Nature of Faeries

Faeries can range from a tall, beautiful, noble race to the diminutive imps we call the ‘little people.’ One of the best explanations as to what they are comes from the unlikely source of a 17th century minister of the Church of Scotland, the Reverend Robert Kirk, who defined them as being “of a middle nature betwixt Man and Angel.” For they are creatures of light and energy, of ‘force’ rather than ‘form,’ who can shift their shape as they please, not being bound by the laws of the physical world.

Today, a new awareness of faeries is returning as people are awakening to the reality of worlds not normally apparent to the five senses. It seems that, with the current crisis on Earth, we are being called to reconnect with those Beings of Light with whom we once consciously shared our planet home. When we pollute, degrade and lay waste to the land, sea and skies, we are destroying their world, too. We tear apart the exquisitely woven tapestry of all creation. And so faeries are bringing messages from the Earth urging us to change our ways from living in separateness to an awareness of our interconnectedness with all beings, visible and invisible, in the great Web of Life.

Connecting with faeries is not as difficult as you may think – you do not need special psychic powers to do so, just the willingness to open your mind and, especially, your heart, as a child might do. Speaking of how to see tree faeries, Ella Young, in a rare interview on KPFA radio, Berkeley, in 1952, said: “You have to be content to know that you love that tree, and you want to love it more, and you know it’s alive and you want to come closer to it.”

Here is a simple way to connect with the faery kingdom:

This Beltaine season, take a faery walk in Nature, preferably where there are trees and plants. Find a place to sit and begin taking some deep breaths:

1. Inhale and imagine a wave of green light rising from the land beneath you, rising up your body to connect you with the Earth below. Exhale and sense a wave of golden light flowing down from the heavens through your body, connecting you with the Sun and Stars. Do this several times until you feel relaxed and charged with the energy of Earth and Sky.

2. Notice three natural things around you and send a line of light from your heart to connect with each one.

3. Now extend connection to everything around you.  Rest and be at peace in this feeling of oneness.

4. Ask for a message from the Faery realm and open to receive impressions that may come to you. The response may come through feeling a light, sparkling, joyful energy; or it may come as words or images in your mind’s eye. Watch out also for signs of animal or bird movements or calls that may carry a message for you.

Have you had the experience of an element or character in your novel wanting a larger role?

Have you ever had an experience of Faery? It's okay to admit it. I have cultivated a connection. You?

Posted by Jodine Turner at 9:59 AM