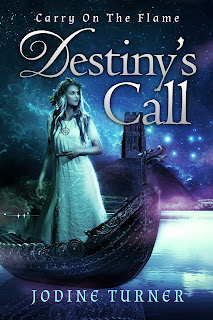 “Visionary Fiction speaks the language of the soul.”
~Jodine Turner

Hillsboro, OR, January 3, 2016 - Award winning author Jodine Turner announces the release of the second edition of her latest novel series, Carry on the Flame. The story is the same, but with gorgeous new cover art. Jodine writes Visionary Fiction, a revived literary genre that harks back to ancient storytelling, yet is contemporary and forward thinking in its focus. With gems of esoteric wisdom embedded in captivating story, and crafted without proselytizing, Visionary Fiction allows a reader to transform and awaken their consciousness through the characters' experiences.

The Carry on the Flame Visionary Fiction series features the modern-day heroine Sharay Kallah as the next in a long line of priestesses born in Glastonbury, England, aka the ancient Isle of Avalon. Sharay's evil aunt Phoebe desperately wants to steal Sharay's fortune and magical powers. To that end, Phoebe arranges for Sharay to be wrongly accused of murder and locked into a psychiatric hospital. Hunted by police, stalked by a demonic Tracker conjured by her aunt, and torn from everyone she loves, Sharay struggles with the temptation to fight Phoebe's dark powers with her own. In order to find freedom, and live the life she was born to live, Sharay must discover and embrace her priestess heritage, her powers, even her dark side. If she succeeds, she will uncover the keys to peace and happiness, for herself and all humankind.

Sharay embodies the feeling of despair and anger many of us can relate to when dealing with situations we perceive to be beyond our control. If you feel you are not listening to your most authentic heart and want to, Sharay's riveting journey is yours. If you have ever felt you have a calling in life that you've resisted or if you are experiencing the challenges of stepping up to meet that call, Sharay's journey is yours.

The setting of Glastonbury in today's England gives the book a rich texture and magical feel that adds to the drama. Much of Jodine's sense of place comes from her own experience living in Glastonbury for a time, where she penned her stories and also met her husband. That experience adds a tone of reality evident in the interweaving of the magical, mystical, and everyday lives of the characters, as the author is herself a priestess and understands the connection we all share to the realms of the seen and unseen that exists all around us.

Carry on the Flame: Destiny's Call is FREE on January 4th, 2016 on Amazon

FANtastic fiction. There are many magical stories out there in the publishing industry, but this is one author who has created a new fresh mythical tale that readers will love.
~Amy Lignor, The Feathered Quill

Jodine Turner has created a suspense-filled novel of magical realism, bridging the ancient past and the present day, combining subtle magic with fated love and crime detection, culminating in  a powerful message of love and compassion, vital for us all. You will be drawn into this magical book, and you will not regret it!
R.J. Stewart,  author of over 40 books on Celtic Mythology and ancestral land-oriented spiritual paths

If you have not yet discovered the magical and visionary work of Jodine Turner, now is the time.
~ Kathleen McGowan, International bestselling author

This gripping tale of magic and adventure, set in both ancient and modern Britain, should appeal to lovers of Celtic fantasy everywhere!
~Mara Freeman, author and Director of the Avalon Mystery School

Carry the Flame is an exciting read for modern day people who love the Divine Feminine; with intrigue, fighting the dark arts, and the challenges of facing a great destiny. This is a Goddess- inspired page turner you won't put down until the end.
~Kathy Jones, author, Priestess of Avalon Initiator and teacher.

*******
About Jodine Turner: While living for a year in glastonbury, England the ancient Isle of Avalon, Jodine began writing the Goddess of the Stars and Sea series about priestesses who have lived in Avalon throughout the ages to today. Jodine is a founding member of the Visionary Fiction Alliance.