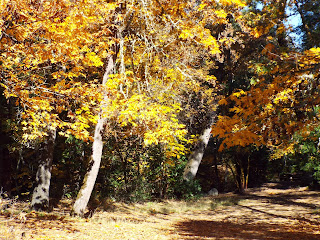 Summer has exhaled and faded. The nights are beginning to lengthen. Leaves burnish in shades of red, gold, and orange, and drop from the trees. The last of the harvest is gathered, and the remains of the crops are tilled back into the fields to nourish the soil for next year’s planting. Our lived life is analogous to this turning of the seasons if we can view it from that perspective. As such, you may ponder what seeds you have planted earlier in the year, what you have created by mid-year, what has now come into fruition to be harvested in your life, and what needs to be nourished for the upcoming year.

Because I am an author of Visionary Fiction (VF), the writer in me also resonates with this season of autumn. And, more so with… yes…Halloween. Not so much the commercial Halloween of clever costumes and adorable children who ‘trick or treat’ for candy, as much as acknowledging this season ‘where the veils are thin between the worlds of the seen and unseen,’ or so the ancient Celtic people asserted.

October 31st, mid-autumn, marks one of earth’s seasonal turning points with a festival called Samhain (pronounced sa-wen, which comes from two words meaning summer’s end), a festival later to be renamed Halloween. Samhain originally celebrated this mystical time when the usual barriers between our world and the otherworld opened to allow contact between humans and their ancestors, the spirits of the dead, as well the fairy folk. Legend says that these two realities now have the opportunity to come together and communicate. These otherworldly realities do not refer to unnerving horror stories often associated with Halloween. Rather, the reference to thin veils between the worlds addresses the unseen aspect of life that often goes unnoticed, and is patently undervalued in our society. In this regard, Visionary Fiction is a sort of ‘X Files’ of the literary world, or even an empirical starship ‘Enterprise,’ in that VF often goes places other fictional genres do not. More importantly, VF takes the reader to these otherworld realms in a manner that other genres do not. The other realms often include intuition, spiritual contemplation, paranormal events and beings, psychic abilities, dreams, visions, the power of synchronicity, the magic of everyday miracles, the metaphysical, or supernatural occurrences.

To be true Visionary Fiction, such realms and experiences are not used as mere plot devices by the VF author. Instead, they are the venues through which characters redeem themselves, as well as the conflicts in their lives and their relationships. Like any character in a well-crafted novel, VF characters struggle to transform their fears – the adversary that lies either within themselves or in their external circumstances. The uncharted and unseen realms that are outside mundane awareness are the arena Visionary Fiction draws upon in its effort to provide stories that give the reader their own internal experience of expanding their minds and their consciousness.

The VF author, or authors of any genre for that matter, can use the energies of Samhain/Halloween to stoke their creative fires. The Samhain passageway opens to winter, that dark half of the year where the earth slumbers and the seed gestates in fertile richness. As authors, we often get a preliminary jolt of inspiration for our novels. As part of our writing process, we plant that seed of inspiration in the rich earth of our imagination in the hopes it will grow. At this time of year, beyond Samhain’s doorway, lies the deep cavern of the Earth Mother’s womb from which all that is intuitive, creative, and natural on this earth is gestating, readying itself to one day be birthed. The stages of writing a novel are similar, whether it is the bare, newly forming concept of a story, or the kernels of ideas for a new scene or chapter.

This time of year can also add its energy to help us to strip away what no longer serves in readiness for rebirth into something better. In my writing world, that is called editing and re-writes!

I like to tap into the Samhain/Halloween energies by partaking in a writing exercise to re-energize my writing life. I invite you to do the same with the following exercise.

Samhain is a time to reflect on the past year’s writing and finish any old loose ends in your chapter, scenes, or manuscript from the previous year.
Have a piece of paper, a pen, matches, and a fireplace or fireproof bowl nearby. Take a few moments to go within. Acknowledge the energies of gestation and transformation that preside over this autumn–into—winter half of the year. Reflect on any old scenes, chapters, character development, plots, etc. that you would like to finish at this time. Your reflections could even include outmoded habits of writing, (or not writing) - whatever old business you’d like to complete or transform with regards to your writing and authorship.
Take your piece of paper and write down your reflections. Light a fire in your fireplace, woodstove, or fireproof bowl, as a symbolic remnant of the Samhain great bonfires of yesteryear. Place the paper in the flames and allow it to burn, to represent the finishing of your old business. As the flames consume the paper, speak your intention for the releasing, transformation, and completion of the old -- and the gestation, inspiration, and germination in your rich fertile imagination and soul, of the new.   Give thanks.

I would love to hear what is creatively gestating in your imagination from this exercise!

*************
Jodine Turner is the award winning, best selling visionary fiction, fantasy author of the Goddess of the Stars and the Sea series about young priestesses who have lived in Avalon down through the ages to today. www.jodineturner.com